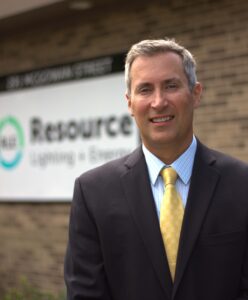 Jay Benson has 25 years of experience in energy production, control, and management. His experience began while on active duty in the United States Navy where he was trained to operate a Nuclear Reactor on the USS Nimitz. After earning his bachelor’s degree in Nuclear Engineering technology, he then went on to collect professional experience working for large private and public lighting control and lighting manufacturers. Benson worked in Field Engineering, Project Management, System Design, Business Development, and Sales capacities to serve the needs of many Fortune 100 and 500 customers throughout the East Coast including many higher education customers.

During his career, he made focusing on customer needs a priority making him the go to expert in the field. During the 2008 downturn Benson was able to assist many customers lower overhead through the deployment of energy efficient building solutions and prevent layoffs. With his vast building systems knowledge, he has been able to consistently design and implement solutions in some of the most challenging building types while daily operations are occurring. Benson has consistently helped customers achieve sustainability goals by enabling them to capture all available Utility Incentives, Manufacturer Rebates, maintenance savings, and tax benefits.

As President of Resource Lighting & Energy, Benson oversees all elements of business development and execution to ensure end-user satisfaction. 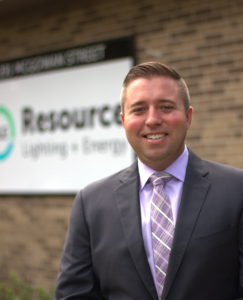 Procko began his career in EE at Lutron Electronics as a Senior Sales Representative, managing the New England market as the sole salesperson in the region as well as managing a Rep Agency of 65 employees. During his 3 years with Lutron, he received extensive knowledge in lighting control systems, developed relationships with electrical contractors and lighting distributors, and helped design lighting control systems at over 60 facilities.

After his time at Lutron, Procko joined a large turnkey EE design company, headquartered in Hingham, MA. Starting as a Business Development Manager he was soon promoted to the Director of Business Development during his tenure. He designed, proposed and sold over 25 large-scale LED, lighting controls and mechanical EE projects during his 3 years at FES.

A few of Procko’s key projects includes a large Boston hospital lighting and controls project, where Procko designed an LED and controls project for the campus in Boston, MA. This project valued over $800,000 and Procko secured the company a utility rebate of over $250,000. Another project includes a Rhode Island Catholic University in Providence, RI. This project was an investment of over $400,00 with an annual savings of over $200,000.